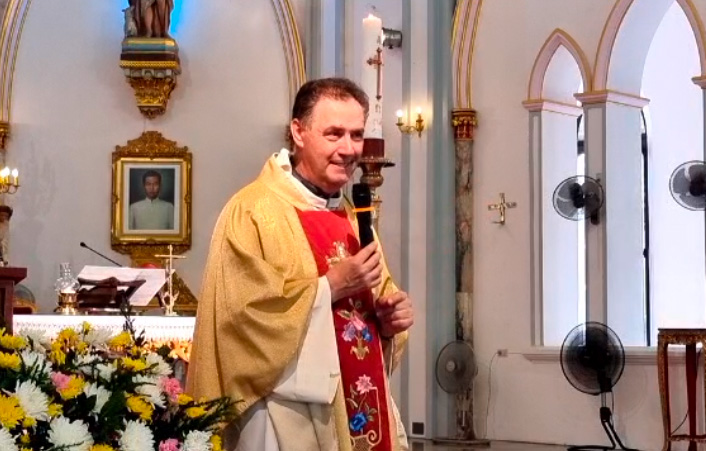 (ANS – Bangkok) – The day of the Rector Major, Fr Ángel Fernández Artime, in Thailand took place as scheduled. Today, May 6, 2022, the last day before the beginning of the Spiritual Exercises with the Provincial Councils of the Region of East Asia-Oceania, the 10th Successor of Don Bosco participated in a series of significant appointments that led him to know and retrace the history of the Salesian presence and the Salesian Family in the country.

The day’s first appointment was the Eucharist that Fr Á.F. Artime concelebrated in the Cathedral of the Nativity of Mary in Bang Nok Khwaek, in the district of Bang Khonthi, Samut Songkhram Province, which is also the seat of the Diocese of Ratchaburi, as well as the place where the first Salesian missionaries started their mission, on August 27, 1927.

To reach the cathedral, the Rector Major and all the Salesians participating in the Spiritual Exercises took a boat that thereby allowed them to admire the way of life of the Thai people who live on the banks of the canal, as well as to appreciate the traditional floating market. It was, moreover, the same route that the Salesian missionaries used to take almost 100 years ago.

On reaching the cathedral, Msgr. John Bosco Panya, a Past Pupil of Don Bosco, Bishop of Ratchaburi, explained the history of the building and the evangelization of his diocese on its front steps; then he presided over the celebration, while the Rector Major gave the homily.

Fr Á.F. Artime used the readings of the day to highlight some aspects of Christian life. From the First Reading, dedicated to the conversion of St. Paul, he drew the lesson that the Lord is always present, even if in different ways, in the life of each person. From the Gospel, in which Jesus presents himself as the Bread of Life and the Beverage of Salvation, he recalled the need to always keep the Lord at the center of one’s life. Finally, on the occasion of the Salesian commemoration of St. Dominic Savio, he spoke of the beauty of Don Bosco’s pedagogy and the great stream of holiness that began with the Saint of Youth, which then took on many different forms and paths.

After Mass, the Rector Major and all the other companions went to and prayed at the tomb of Msgr. Gaetano Pasotti and Msgr. Pietro Carretto, Salesian missionaries and pioneers of the Diocese of Ratchaburi, visited the seminary that became the formation house for Salesians and diocesan seminarians during World War II.

“The visit to these historic places of the Salesians in Thailand ignited in all of us gratitude to the missionaries who paved the way for the Salesian missions with their hard work and patience. Without them, there would be none of us today,” they said from the Office of Social Communication of the “St. Paul” Province of Thailand.

Afterward, the Rector Major and his large group began their journey to Hua Hin, where the Spiritual Exercises will take place starting tomorrow. On the way to their destination, they stopped at the Narivitthaya School of the Sisters Servants of the Immaculate Heart of Mary (SIHM) – the fourteenth group of the Salesian Family – where the religious cheered up the guests with traditional dances in a family atmosphere.