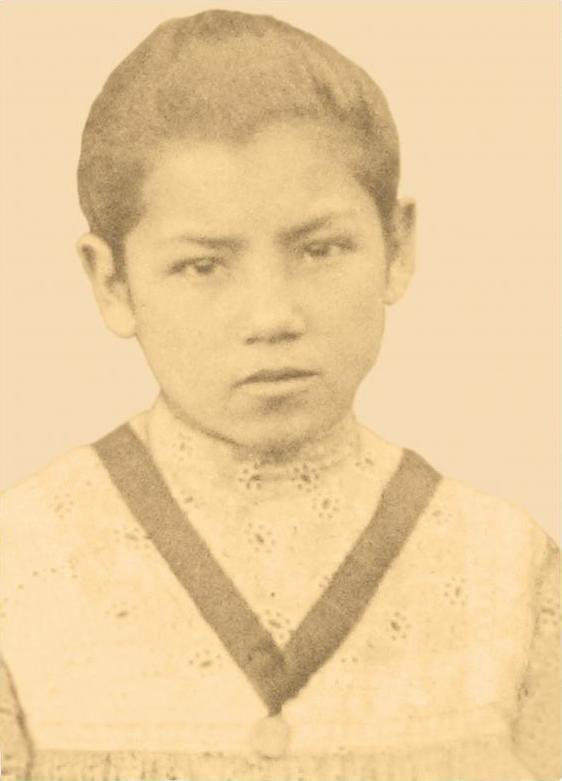 On January 22, 1904, 118 years ago today, a humble Chilean girl died at the age of 12 in a small and isolated town in the western desert of Argentina. The girl had the name of Laura del Carmen Vicuña Pino and she had been born in Santiago as the daughter of a famous Chilean soldier, José Domingo Vicuña, who belonged to a prominent family of politicians. Her mother instead of her, Mercedes Pino, was of very humble origin, for which she was not very accepted by her husband’s family. The story cracked for the young couple just in the year Laura was born in 1891, when the first and largest Latin American workers’ revolution broke out in Chile and aristocratic families like the Vicuñas were persecuted. Already in her cradle, Laura begins a story of escapes, just like the same sacred family that fled to Egypt. Laura thus begins to embody the suffering of the persecuted and of the immigrants who leave their lands where they are in danger in search of a better life. Bitterness, on the other hand, would not leave them. They arrive at the extreme south of Chile, at the city of Temuco, capital of the province of Cautín and of the Region of La Araucanía. There, without many resources, the second daughter, Julia Amada, was born, but José Domingo died shortly after, in 1894, leaving a widow and two little girls in complete misery and the object of political persecution.

Mercedes decides to continue her flight and enters Argentine territory, to reach the province of Neuquén, where she looks for domestic work to feed her girls. She was a lonely and vulnerable woman, who would soon attract the attention of the owner of a ranch on the banks of the Quilquihué River, a man named Manuel Mora. Estancias in Argentina are haciendas where tourists and travelers can stay. Mora not only gave Mercedes a job, but was also attracted to her and, as happens with all abusers with absolute power over their vulnerable victims, such as a widow with two little girls, pressured her to live with him, in concubinage, in exchange for protection and study for their daughters. Mercedes gave in to the landlord’s pressure and in this way the girls were admitted to the school of the Salesian sisters of Junín de los Andes, where Laura would approach the spirituality of Don Bosco. The stories of young saints like Dominic Savio would soon fulfill the hopes of the Chilean girl, who began to call the school of Mary Help of Junín de los Andes as her “paradise”. Don Bosco certainly offers his children and young people not only access to a future field with a commendable education of discipline and love, but also the gift of holiness. Dominic Savio’s phrase, to die before sin, was surely heard and meditated upon by a little Latin American girl, her victim from her cradle of persecution and forced emigration. Salesian youth holiness is greatly expressed in this South American region of the Southern Cone also with the closeness of another contemporary child of Laura, Blessed Ceferino Namuncura (1886 – 1905).

In the reports of the Salesian sisters about Laura, she is described as a very devoted girl, charitable towards her companions and responsible with her work. But the moments of returning home on rest days began to mortify the girl, seeing how her mother was a victim of abuse by Mora and she herself was attacked several times and even tried to sexually abuse her. She was saved by her childlike and courageous devotion which, however, drew the fury of the man, who threatened to suspend her studies if she pursued the idea of being a nun. The Salesian sisters, knowing the girl’s sufferings, granted her a scholarship, but in Laura’s mind a project of holiness began: Save her mother from that man and purify her soul. For Laura, her mother not only lived in concubinage, but she was also a victim of abuse and humiliation, which put her own daughters in danger.

This project of holiness began in her first communion at the age of nine, which occurred on June 2, 1901, where she consecrated her life to Jesus and her purity to the Virgin Mary. She also set as a purpose then “to repair the offenses that God continually receives from men, especially from people in my family.” For the following months, the girl would be a victim of her mother’s sufferings, but she would cling to her evangelical purpose with the faith that only a child knows how to demonstrate.

As a last option and meditating on John 14, 13 “greater love has no one than this, that someone lay down his soul for his friends”, she offers his life to the Lord for the salvation of her mother. The divine offer was heard and Laura begins the journey of her illness: “Lord, may I suffer everything that seems good to you, but may my mother be converted and be saved.”

Already in the last days of her life, she confesses to her mother: “I die. I myself asked Jesus, two years ago I offered my life for you, to ask for the grace of your conversion. Mom, before I die, will I have the happiness of seeing you repentant?”

Mercedes, with tears in her eyes, tells him: “I swear to you right now that I will do whatever you ask of me. I am sorry. God is witness to my promise!”

Laura said to the priest who assisted her, and then to her mother: “Father, mother promises at this moment to abandon that man; be a witness to his promise […] Thank you, Jesus! Thank you, Mary! Goodbye, Mom! Now I die happy!”

At such a young age, this Latin American girl was a victim of many of the ills that afflict our modern world: Her family was the object of political persecution, displacement and emigration. Her mother was left a widow and alone, like so many women today who lose their husbands in the midst of so much violence or who are abused and abandoned. Ultimately, both her mother and her two daughters end up in the hands of an abuser.

​This abrupt reality that reminds us of the evils present in so many forms, is also well contrasted with the wonder of the graces of the mysterious God. Also Jesus from his cradle was subject to persecution and emigration and also grew up in poverty. But his simple mission to bring the Gospel to humanity led him to the cross itself. “With the songs of the little ones, of the little babies, you have prepared your praise” (Matthew 21, 16). Laurita has known how to bring that divine praise to perfection, in her simple life, in her pure devotion, in her magnanimous purpose that speaks to us of conversion, of the dignity of women, of the migrant, of the poor and of the persecuted.

The Salesian sisters of the time were in charge of recording this miracle of Laurita’s brief and meaningful life, although surely with good intentions, they gave a European face to a girl born in indigenous, Mapuche, Latin American lands that posterity would have to rescue.