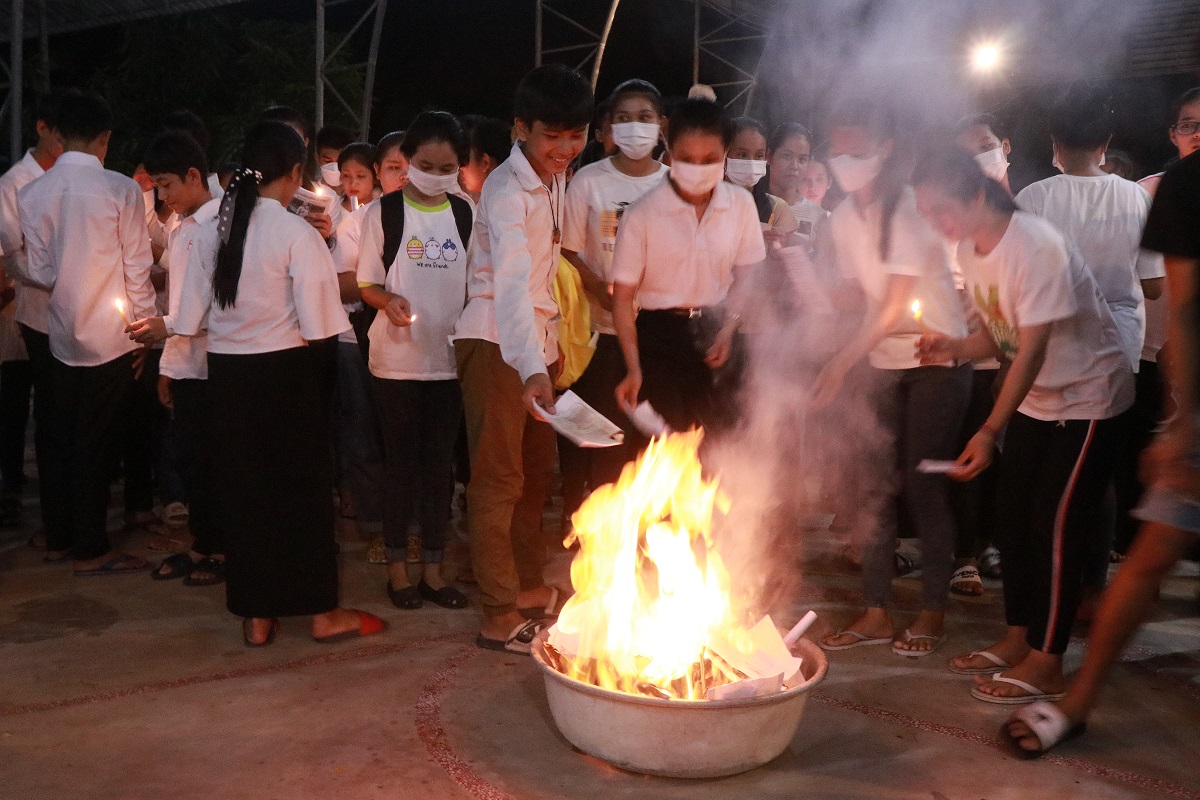 Cambodia — The different centers of Don Bosco in Cambodia present in five provinces, celebrated the feats of Mary Helps, a Salesian tradition linked directly to Saint John Bosco. The Virgin Mary, Mother of Jesus (Acts 1:14), is highly venerated in most Cristian churches, especially the Orthodox and Latin churches around the world. As most Christian doctrines recognized Jesus as the Incarnation of the Godhead, Mary of Galilee is hold by default as Saint Elizabeth said in her visit: “Blessed are you among women, and blessed is the fruit of your womb” (Luke 1: 39-56.)

The historical recognition of Virgin Mary as a meaningful role in the Christian doctrine of Salvation since the time of the Fathers and Mothers of the Church, has created a numerous advocations through history linked to nations and places where Christianity has arrived.

Don Bosco, a Catholic priest from the 19th century’s Savoy Kingdom and founder of the Salesian Family for the education of children and youth, especially those who are poorer and at risk, was one of the main promoters of the advocation of “Mary Help of Christians” at his time. He himself told of a dream he had when he was 9 years old, where he saw Lord Jesus and how the Lord pointed to him His own Holy Mother as a special guide for his future apostolate as a priest.

But the advocation of Mary Help of Christian is ancient. During the first century of the Christian era, the Greek Fathers of the Church used two titles for the earthly mother of Jesus: θεοτοκος (Teotokos, Theotokos, Mother of God) and βοηθεια (Boetheia, the Helper). About 1576 a priest from Loreto-Italy, Bernardino Cirillo, used the invocation Auxilium Christianorum in a litany after the Battle of Lepanto. But the definite designation of the Solemnity of Mary as help of Christians was under Pope Pius VII, who was a prisoner of Napoleon and the promise he made to the Virgin. He entered as a free man from the oppressor on 24th May 1814, two years before the birth of Saint John Bosco and created that date as the commemoration of this special advocation.

Don Bosco grew knowing that advocation his entire life, seeing the Holy Mother of the Lord as a helper in the times of trouble and a kind protection against evil. He, then, created several perennial monuments to the Virgin under that title, one of the most important was the foundation of the Daughters of Mary Help with Saint Mary Mazzarello. He also built the Sanctuary of Mary Help of Christians.

The Salesian Family, today present in 133 countries around the world, bring this devotion to the earthly Holy Mother of the Lord to every where, asking Her Holy protection and support in all projects for the best education of the young. In Cambodia, the two first Salesians to arrive, Fr. Valter Brigolin and Br. Roberto Panetto, came during the Solemnity of Mary Help on 24th May, 1991 and Fr. John Visser on the following year, same date of 1992. Fr. Leonardo Ochoa, the second rector of Don Bosco Phnom Penh, dedicated the chapel of the school to Mary Help of Christians.

Although the Don Bosco schools in Cambodia are social projects without any religious duty for students and the respect and sharing with all religious believes, especially with Theravada Buddhism that is the religion of most Cambodians, the celebration of Mary Help as a traditional Salesian symbol of unity and ecumenism, joins the academic communities in a moment of candles, songs and thanksgiving withing the cosmology of all religious to the sense of motherhood, empowerment of the female value of protection of life and nature and love for each other as members of the single human family.

During the two years of pandemic (2020-2021) of lockdowns and irregularity of studies, Don Bosco Cambodia was courageously near the poor, especially children and youth, providing support to the hungry, getting technical materials to guarantee study continuity and preventing any contamination. During that time, there were not cases of covid19 inside any Don Bosco school, at least before the national vaccination program led by the Royal Government.

In a global society where materialism is taking the lead and there is a general lost of ancestral values to privilege a society of consumerism, spiritual symbols remain as reminders of the deep sense of love, believe and commitment for a better future. As it was for Don Bosco during his lifetime, it is also now for us the sense of protection from God in the humble symbol of a farmer young woman from an ancient Galilee town, who was able to understand the mysterious call of God and said yes to it to open the gates of the heaven realms.