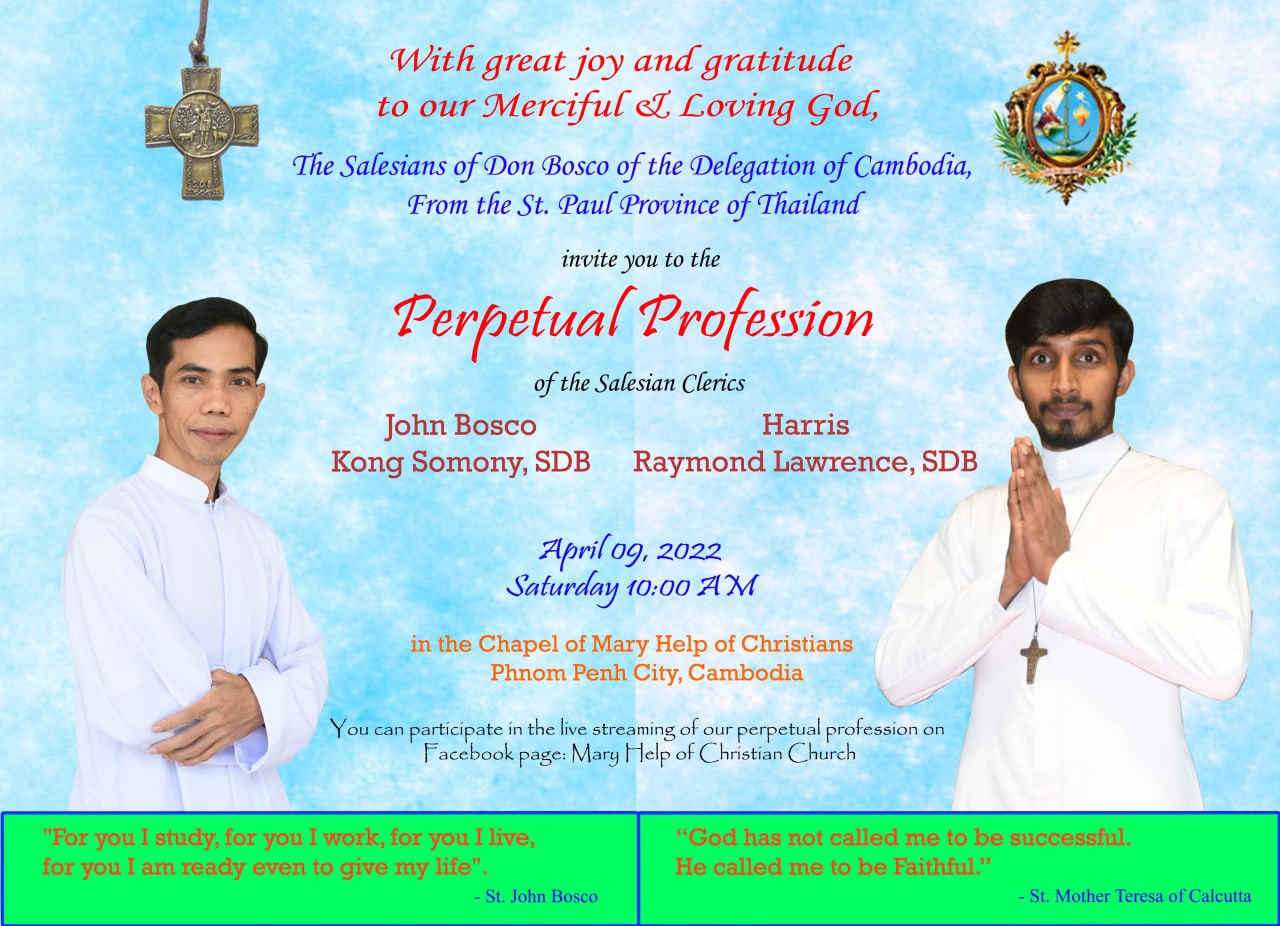 DON BOSCO PHNOM PENH — The Salesians of Don Bosco in the Kingdom of Cambodia, are very glad to invite to the religious ceremony for the perpetual profession of Br. John Bosco Kong Somony of Cambodia and Br. Raymond Lawrence of India, this one a missionary to Don Bosco in this country. Both are currently in religious formation to become Salesian priests.

The religious ceremony will be on the 9 of April, Saturday, at 10 AM at the Mary Help of Christians Chapel of the Don Bosco Phnom Penh Centre, during the Holy Mass that will be presided by Fr. Roel Soto, religious superior and delegate for the Salesians in Cambodia. Due to covid19 prevention, the attendance will be limited and some digital platforms will be activated for a real time follow of the special moment.

Br. John Bosco Kong Somony (born in 1985) is a past pupil of the automotive department of Don Bosco Phnom Penh. He comes from the Catholic Parish of Pursat Province and he was also a teacher at Don Bosco Center Poipet and assisting the children in that project before applying to be a religious consecrated person with the Salesian Congregation. In his religious formation, he studied as an aspirant in Cebu, Philippines between 2009 and 2011 and in the Salesianum Sampran, Thailand between 2012 and 2017, where he got his degree in philosophy and religion of Saengtham College. He speaks Khmer as native language and English and Thai as second languages. He did his practical training in the Salesian centers of Phnom Penh, Battambang and Sihanoukville. For the ceremony, Br. Somoni is inspired by the phrase of Don Bosco: “For you I study, for you I work, for you I live, for you I am ready even to give my life.”

Br. Lawrence Harris Raymond was born in Bangolore, Karnataka, India in 1995 and was assigned as missionary ad gentes to Cambodia, arriving in 2018 for practical training at Don Bosco Sihanoukville. Then he was sent to Don Bosco Phnom Penh. Besides his native language Kannad of Bangalore, the national language Hindi and the English language, Br. Raymond is very fluent in Khmer language. For the ceremony, Brother is inspired by the phrase of Mother Teresa of Calcutta: “God has not called me to be successful. He called me to be Faithful.“

The perpetual profession is a religious Catholic act where the Catholic monk made the promise before God the Most High to be loyal for the rest of their lives, to fulfill their religious vows of poverty, obedience and chastity and to work in the religious Congregation of Don Bosco for the salvations of souls, especially those of poor children and young people. As we are in a country where Buddhism is the religion of the majority, it is clearer to explain that the Salesians of Don Bosco are as Buddhist monks, living also in community (the Sanga in Sanskrit,) where prayer, meditation and works of charity are the main activities of the Catholic Salesian monks. There are two kinds of monks about the Salesians: The Salesian priests (those who can preside the Holy Sacraments) and the Salesian frères (called generally as Brothers,) who live their religious consecration as monks of the workshops, animating the young people in their skill education and catechesis. The Salesians in formation such as Br. Somony and Br. Raymond, are called “Brothers” or “Frères” until they are ordained as priests by a Bishop.