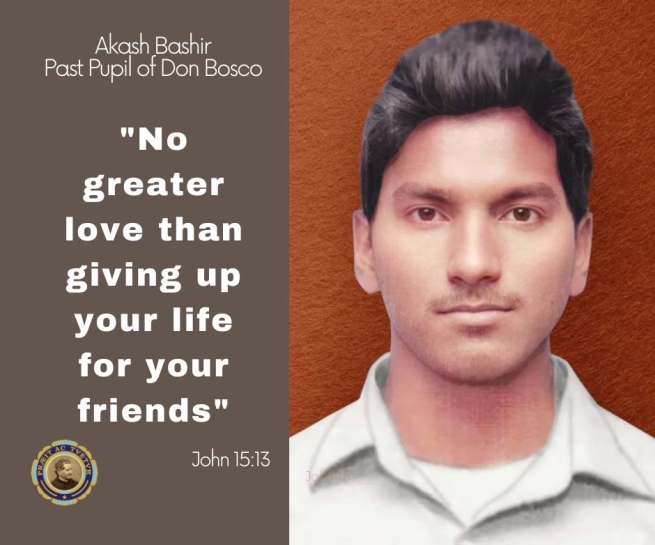 (ANS – Lahore) – Today, March 15, 2022, in the Cathedral of Lahore, Pakistan, by Archbishop Msgr. Sebastian Francis Shaw, OFM, the Diocesan Inquiry on the martyrdom, the fame of holiness and signs of the Servant of God Akash Bashir (1994-2015), a former student of Don Bosco in Lahore, Pakistan, was officially opened on the 7th anniversary of his death.

Akash Bashir was born on 22 June 1994 in a humble family and had studied at “Don Bosco” Technical Institute in Lahore. He led a life like any other young man and had his own dreams for his future. He lived with his family, had friends both at school and at work, enjoyed playing sports and prayer was part of his life. He was committed to living as an “upstanding citizen and good Christian,” as Don Bosco wanted, and became a security volunteer at his parish church at a time when the situation in Pakistan was worrisome with the risk of encountering suicide bombers targeting religious places.

In fact, on March 15, 2015, a Sunday morning, a suicide bomber attempted to enter St. John’s Church in Youhanabad, a Christian neighborhood of Lahore, which at that time had over 1,000 worshippers inside attending Mass. When he realized the situation, Akash did not hesitate to sacrifice himself to prevent the bomber from causing a massacre in the church.

“He was only 20 years old, with an entire lifetime ahead of him, when he chose to protect others with the most precious gift he had on this earth: his life,” commented Bryan Magro, president of the World Confederation of the Past Pupils of Don Bosco, which is a co-actor in the Cause, in a message.

“Akash Bashir embraced the values of Life, Liberty, and Truth that we believe in as the Alumni movement and friends of Don Bosco. He defended life by giving up his life! He defended freedom by opposing violence. He embraced truth by fighting radicalization. He is a perfect example of the gift of a Salesian education that we, alumni and friends, have received through the charism of Don Bosco,” the World President of the Confederation further added.

The Christian community of the district of Youhanabad was extremely happy with the news of the opening of his Cause of Martyrdom.

This young Salesian former pupil becomes the first Pakistani on his way to the altars and represents all persecuted Christians in countries with a Christian minority and all young people who are brave and proud of their faith.