(ANS – Rome) – The Strenna’s message represents an invitation addressed by the Rector Major to the whole Salesian Family to know how to trace new paths, even in the wake of their own charism. This year then, reaching the end of a six-year term, the Strenna really wants to indicate a legacy to be preserved and valued: for 2020 the Successor of Don Bosco, Fr Ángel Fernández Artime, started again from the heart of the Salesian educational system to illustrate “the policy of the Our Father”. Today, Friday 27 December, he presented it as a premiere at the Generalate of the Daughters of Mary Help of Christians.

“Good Christians and Upright Citizens” is the title of the Strenna 2020, which deepens the Gospel verse: “Your will be done, on earth as it is in heaven.” The Rector Major, in his presentation before Mother Yvonne Reungoat, Mother General of the FMA, with his Council, of Fr Filiberto González, General Councilor for Social Communication, and other members of the Salesian Family, began by recalling the many different ways and expressions with which Don Bosco exhorted to form young people who knew how to be the leaven of a more just and more humane world.

Subsequently he delved, step by step, into the many areas in which to be good Christians: good Christians in daily life illuminated by faith, in careful discernment, in apostolic zeal and evangelizer, in an authentically Salesian spirituality, in missions ad gentes, in courageously going outward towards the peripheries and out of one’s own comfort zones …

In the same way, then, he indicated the priorities and criteria for living as upright citizens in the world: bearing witness of justice to young people, solidarity, the protection of the most vulnerable, educating young people to active and responsible citizenship and to service in politics, pushing away from oneself every form of corruption, taking care of a world in movement and in migration, of caring for the common home, of effective respect for Human Rights …

The Strenna 2020 video is available on ANSChannel, in the various language channels. 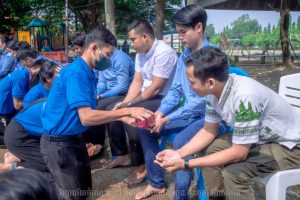