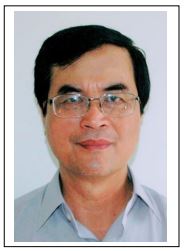 The Salesian Province of Vietnam has lost one of its dedicated confreres, Fr. Peter Pham Van Chinh SDB (65 years old, 33 years as Salesian and 22 years in priesthood). Suddenly, in the early morning of the 24th of November, God called him back to Heaven at the sorrowful sentiments of all Salesians and members of the Salesian Family. Fr. Peter Chinh made his first religious profession right at the moment the War of Vietnam had ended with the victory of the communists (the 15th of August, 2974) and the missionaries were being sent out by the government. He belonged to the group of young Salesian generation who perseveringly followed Don Bosco in spite of all vicissitudes. God has given him many talents that he used for education and evangelization. He served the Provincial Council as Secretary from 1997 and from 1998-2021, as Provincial Councilor.

The last ten years, as Vietnam has been more open, he pioneered in the sector of Social Communication, preparing himself with major studies in English and software programming. Under his animation, the Sector of Social Communication of the Province of Vietnam has flourished and contributed to the educational and evangelizing services with online platforms, website of the province, film and video production, editor and publisher of translated Salesian books and Salesian Bulletin, of bimonthly magazine for Catechists, life stories of saints. He succeeded to set up a network of lay collaborators in various fields: collaborators for article writings, for distribution of publications in parishes and bookstores. Recently, he and his team has set up a studio for weekly video’s that spread news on Salesian Family, all messages of the Rector Major and Sector General Councilors, Talks of the Regional and Provincial as well as various Sessions with home-visit missionaries and youth issues group discussion. In 2019, he was nominated as Regional Coordinator of Social Communication of the East Asia Oceania Region. Also, the Salesian Family Members and the young will miss him as a retreat preacher and well-grounded teacher on Christian Morality and Mass Communication. May God reward this faithful servant in welcoming into the Salesian Garden in Heaven. May Don Bosco intercede for his eternal happiness as he made Don Bosco widely known in his country. May Mary accept him as he leaves this earth to enter the eternal Home on the monthly day the Salesian Family honors Her as the Help of Christians.

Presentation of the Theme for Strenna 2022

Letter from a Grateful Heart

Presentation of the Theme for Strenna 2022